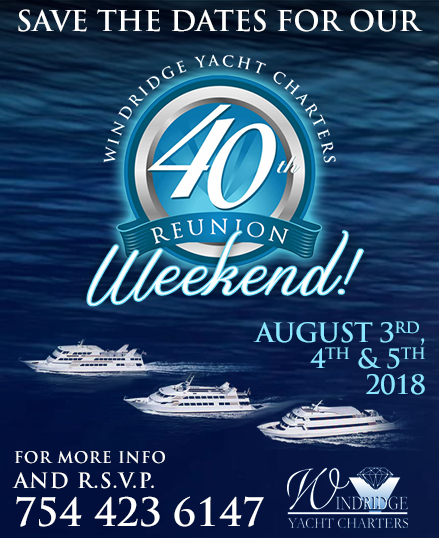 By Maribel April 6, 2018 Uncategorized Comments Off 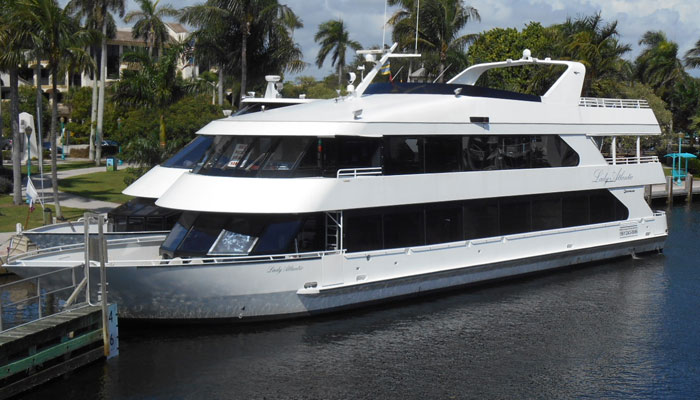 The Anticipation IV Party Yacht is one of the best values in Fort Lauderdale – can travel down to Miami too and also to West Palm.

Anticipation IV is a modern, well-priced, affordable party yacht based in Fort Lauderdale. She can accommodate 130 guests and seat 60 in the dining area. Nice dance floor on the upper deck.
Excellent choice for weddings, social events and corporate cruises on a budget. 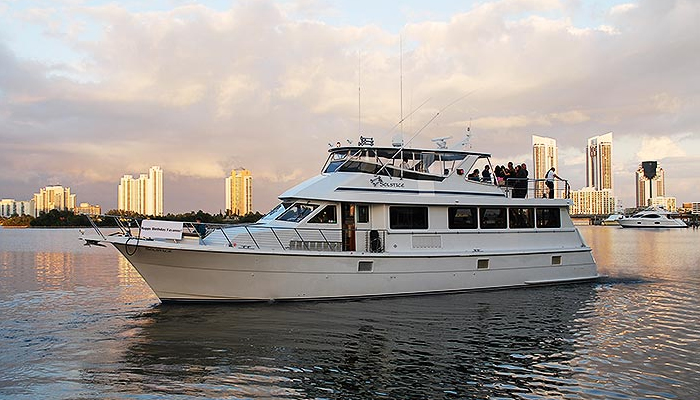 Boat Miami offers the yacht Solstice, a superbly appointed and elegant party yacht for Corporate Cruises and Social Events in Miami & Fort Lauderdale. This 45 passenger commercially licensed vessel, offered by Boat Miami, can accommodate smaller groups and is ideal for high-end corporate events, birthdays, and family day cruises.
This motor yacht can do short overnight trips to the Florida Keys and has accommodations for 4 guests in two large cabins with king size beds and ensuite heads (bathrooms). Built by Hatteras, the premier US yacht manufacturer, she is 80 feet in length.

Accommodations
The yacht Solstice is USCG certified for a maximum of 45 guests plus crew for day-cruises and evening parties and long weekends afloat. She has two large guest staterooms with ensuite heads for overnight trips.

Amenities
An extremely well-appointed yacht, built in 1998 and re-fitted in 2009, with plenty of space for dancing on the upper deck, socializing and generally having a great time. Dinners can be buffet style with informal seating. For wedding charters, the yacht can offer ceremony and reception and a range of special services, including officiants, flowers, and entertainment.

Layout
Boarding deck or main deck includes an ample and tastefully decorated salon with comfortable armchairs, and a beautiful table. The upper deck is a great place to watch the world, see the stately homes along the inland waterway, Port Everglades or the Miami city lights in the dusk and the setting sun over Biscayne Bay. 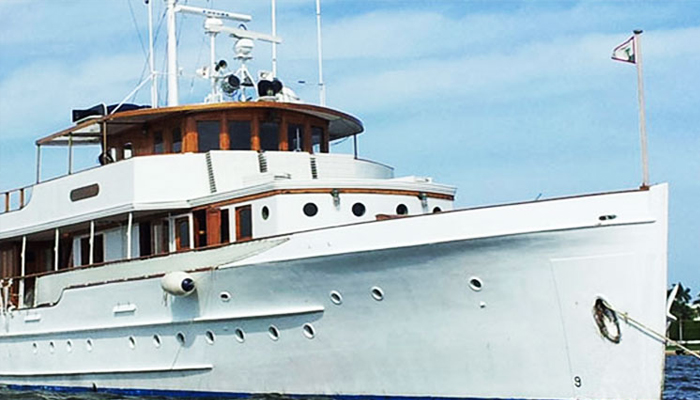 Mariner III is an absolute classic 1920’s yacht that has been superbly maintained over the years by loving owners.

Her appearance and shiny bright work will always attract attention from discerning guests.

Available in West Palm in the Winter and New York in the Summer, this classic party yacht makes an ideal venue for Weddings, Social celebrations of all kinds and Corporate events on the water.

Mariner III was built in 1926 for Captain James Griffiths of Griffiths Steamship Company. This classic 122′ fantail motor yacht, was designed by Ted Geary. Traveling to China to select the lumber for her construction, Captain Griffiths chose 3″ teak planking for the hull and very strong wood, called yacal, for framing. Originally named “SueJa III,” Captain Griffiths used the yacht to travel up and down the West Coast. Among his travels on SueJa III Captain Griffiths visited many parts of California. It was in these waters where the actor John Barrymore made his way on board and demanded to see the owner. Barrymore insisted on purchasing the vessel! Captain Griffiths, poking his finger into the tall actor’s chest, said, “This yacht is not for sale at any amount!” Barrymore, however, did not leave empty-handed. Captain Griffiths introduced Barrymore to Ted Geary who designed a sister ship for the actor. It was the least Griffiths could do for a man who had exquisite taste in boats! Barrymore named his yacht “Infanta” and gave it to his wife for her birthday. It was 120′ in length and cost, in those days, $225,000 to build.

Captain Griffiths used SueJa III for private use up until World War II when the Army commandeered her for wartime service. They ballasted down and set her out on patrol, mainly in the Aleutian Islands. After the war effort, the Army returned SueJa III to her owners. By that time Captain Griffiths had died a natural death. Without her proud owner to command the helm, SueJa III was placed into the custody of Arthur Ayers (Captain Griffiths stepson). Mr. Ayers used the vessel to initiate a charter service. He sent the yacht on many charters in Alaska where she did quite well commercially. In the early 1950’s Mr. Ayers sold the yacht to a Californian, O. J. Hall, who replaced her Washington Iron Works Diesel with Detroit Diesel 6-110S, a pair of engines that were in service for more than thirty years. Mr. Hall used the yacht to race up and down San Diego Bay. After a few years of service she was sold to a new owner-a New Yorker who voyaged on the vessel to the Mediterranean. After a short time, she wound up in Cannes, France. In keeping with its original 1920’s design and the flavor of that era, the Kennedy Engine Co., Inc. restored the Mariner III to its old world charm with deep, rich, patterned furnishings, beautifully varnished woodwork, and polished solid brass fixtures. It took over two years with a team of 12 men.

Her reputation for excellence is known throughout New York, New England, Florida and the Caribbean. She has enjoyed guests on board from Jacques Cousteau, the Rockefellers, Harrison Ford, Bruce Willis, Robert Deniro, Don Henley, Jimmy Buffett and Madonna, in addition to a long list of corporate giants from across the country. You might recognize her from magazine ads for Ralph Lauren and Maybelline, fashion and travel editorials in The New York Times Magazine and many layouts in Victoria’s Secret catalogs.

Miami Lady is an affordable 74′ elegant party yacht based in Miami, Florida, she is perfect for weddings, corporate events, and other social functions like Bar and Bat Mitzvahs, and Birthdays for up to 120 guests. Departure locations from Miami to Fort Lauderdale.

The Miami Lady is a 74 foot air-conditioned luxury yacht, US Coast Guard certified for 120 passengers that is based in Miami, Florida. Organize your dinner cruise and enjoy the sunshine and sea breezes on the upper deck, or relax in the climate-controlled comfort of the interior salon. Miami Lady offers affordable but elegant dining or party experiences for 2,3 or 4 hour fabulous sunset dinner cruises. You will be delighted by the attentive service combined with her comfort and style. 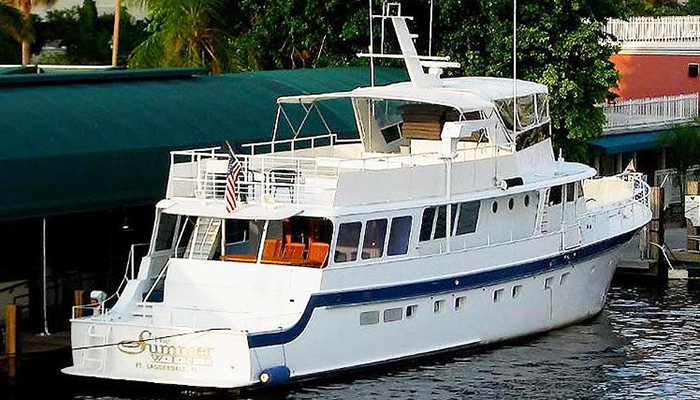 Summer Wind is a beautifully appointed 91′ Striker Motor Yacht that is Coast Guard Inspected and certified for up to 65 passengers. She can be chartered by the day or the half day. Her ample top deck with its built-in bar, is terrific for dancing with a band or a DJ. She is one of the more sophisticated party boats available in the Miami/Fort Lauderdale area.

Amenities
Call us to book this fabulous yacht for all your party needs.

Lady Chateau is a 70′ luxury, intimately-sized Private Party Yacht for smaller groups of up to 70 guests.
Lady Chateau is a beautiful, clean and elegant 70′ vessel for cruising the Intracoastal Waterway or any other Florida East Coast hot-spots. She spends the summers in Minnesota and the Winters in Fort Lauderdale. She can pick-up passengers in Miami, Fort Lauderdale, Boca Raton or West Palm Beach. She is Coast Guard certified for up to 70 guests.

Accommodations
The Lady Chateau has a remarkable top-deck and aft-deck where guests can sit and relax and view the gorgeous Florida waterways.

The 100′ dinner yacht MT Celebration should be your first choice for a truly Great Party!! Owner operated MT Celebration will guarantee you the best party of your life. Whether it be a wedding, a Bar or Bat Mitzvah, or any other social or corporate ocasion, this is the one to book. Conveniently berthed in Coconut Grove, with ample FREE parking, she is well priced and ready to rumble. The ultimate “good time” dinner cruise and party boat.MT Celebration is a great choice for the budget conscious who are not looking for the most luxurious yacht in town but are looking for great food served with a smile and great music for dancing under the stars.

With her own chef on board she has excellent food available with a wide array of options for your buffet style dining or your elegant sit down dinner. Also included is an amazing display of desserts all prepared by the chef himself.

El Loro (the Parrot) is a unique party boat specially designed to replicate a real pirate ship like the ones that plied the waters of the Caribbean in the 16th and 17th Centuries. Both adults, teenagers and children appreciate the great times that can be had by arranging for a party on board this beautifully maintained little ship. She can travel up the Intra coastal waterway to Fort Lauderdale or go out on Biscayne bay or simply cruise around Star Island to see the celebrity homes.

Accommodations
El Loro is a Coast Guard inspected vessel certified to carry up to 100 guests. She is US built and flagged and operates out of Miami. El Loro is an authentic Spanish Galleon replica dated from the 16th century, designed with all the technical and security specifications to meet all required permits from the USCG. It has a capability for 100 passengers comfortably seated, professional sound equipment, party lights, dancing area, ladies and gents’ restrooms and air-conditioned lounge bar.

Guests can charter El Loro on an exclusive basis for special parties. El Loro has her own catering service with a varied menu that can range from Spanish Paella to Pizza to special a-la-carte delights. El Loro has a great music system and DJ’s can be arranged for great dancing parties. Call us for a catering and DJ quote.